On the eve of July 4th, an event took place that restored my faith in democracy. A public meeting had been called in Richmond, Illinois to debate the merits (or lack thereof, judging from the unanimous responses of the residents) of a proposed ordinance that would have banned many weapons from the environs of the village. It had only been recently decided that this would be a topic of debate, and thus many of those that were there were only notified briefly before by a Herculean effort on behalf of Melissa Denker and the McHenry County Young Republicans.

Upon pulling up to the Richmond town hall, I saw a large gathering of men and women, most wearing pro-Second Amendment and NRA t-shirts. While my GPS hadn’t told me I was at my destination, I gathered that this was the meeting place judging from the attire they were wearing. The meeting room filled up rather quickly and as soon as the mundane topics of business, the minutes and a report on the purchase of a lawnmower, were complete, village president Peter Koenig read the legislation in full which led to many understandable outbursts and questions from trustees on what certain firearms paraphernalia were and how they functioned. The crowd seemed enthusiastic to let the trustees know what detachable magazines and the so-called “barrel shroud” actually were, as opposed to the definitions given to these items by the media earlier in the year.

After some discussion of the terms, the public voiced their concern- and were unanimously opposed to the ordinance. It wasn’t only the public that had common sense at this meeting; Trustee Craig Kunz said that he “would have a hard time voting [the ordinance] up or down if I don’t know what the hell it [means].” At this statement, applause broke out. One resident asked if there was any other constitutional right that the board would take advice in legislating on from Springfield or Chicago politicians. Another resident posed whether or not the board would be ready for the lawsuit that would be filed by the residents and the National Rifle Association, and where they would find the money to fight that lawsuit. Other residents appealed to the right to own firearms such as the AR15, stating that it’s much easier for women and the disabled to manipulate due to its considerable lack of recoil compared to other firearms commonly used for self-defense. Another man, who owned a machine shop that made tools for the housing industry, appealed to the board on economic terms, stating that as a result of the housing bubble burst and the considerable lack of business, he had purchased $500,000 in machinery to manufacture custom AR rifles, and that he would be possibly be able to re-hire the four people he’d had to lay off since 2007. The ordinance would have effectively shut down his new venture.

While I’m certain there were one or two trustees who would have voted in favor of the law, the public outrage about the ordinance led to a unanimous rejection, 6-0 with one abstention due to absence.

The residents of Richmond declared their independence from the big city politicians and made sure that their elected officials heard them loud and clear. While many times it seems the deck is stacked against the people, this was one case at the local level where interest of the public was able to prevail. Local government tends to have the biggest impact on our lives and it’s where we can make the most difference, if we stand up like the residents of Richmond, Illinois did. 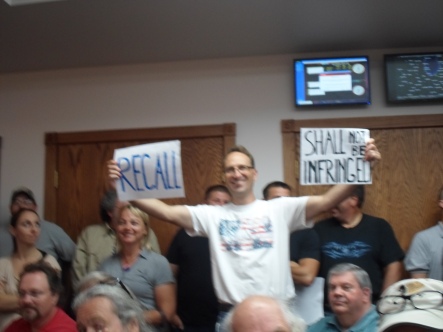 One of the disaffected residents warns the Richmond, IL trustees what will happen if they approve a gun ban on July 3, 2013. The measure failed, unanimously.