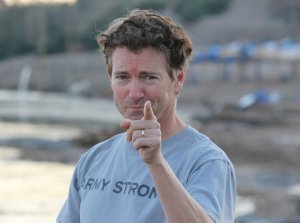 Last week, military lawyer David French wrote that “I’m noticing military libertarianism increasing, not decreasing, among the more politically aware and engaged officers and enlisted.” French’s column affirms a hunch I’ve had for some time: that libertarianism is a military ideology.

I’ll illustrate my point. Suppose the United States was attacked, or faced the credible and immanent threat of an attack, during a Rand Paul presidency. How might President Paul respond?

Firstly, I think we can expect that Paul would use the U.S. military to thoroughly destroy both the enemy’s offensive capabilities – as a matter of simple practicality – and the enemy – as a matter of long-term deterrence.

Paul has said that, when we must fight, “we fight to win.” Antiwar’s Steve Breyman – who I presume is some sort of pacifist – has called this statement “code for the application of massive, unrestrained levels of violence.” If by this Breyman means destroying all those responsible for and complicit in an attack or near-attack on Americans, even at the inevitable cost of civilian casualties, I essentially agree.

Secondly, Paul would begin withdrawing U.S. forces as soon as these tasks had been accomplished to a reasonable degree. Libertarians recognize that soldiers are not police; it is both unnecessary and counterproductive to, for any prolonged period, put soldiers in the role of alien interlopers patrolling streets that are not their own.

The late CBS journalist George Cirle III, who wrote the book that inspired Charlie Wilson’s War, once said that America helped grow Al Qaeda by “washing its hands” of Afghanistan in 1993. In other words, by not doing enough nation-building in the Middle East.

Cirle, apparently, never looked at any Al Qaeda propaganda. That American forces did not stick around long enough to install plumbing in Afghanistan has never been one of its primary talking points.

Appropriately, Paul recognizes that it is neither feasible, nor the job of American soldiers, to forge new republics by affixing American-style governments to cultures vastly different from our own. In Paul’s own words:

Instead of large, limitless land wars in multiple theaters, we would target our enemy; strike with lethal force.

We would not presume that we build nations nor would we presume that we have the resources to build nations.  Many of the countries formed after WWI are collections of tribal regions that have never been governed by a central government and may, in fact, be ungovernable.

In other words, Paul’s foreign policy would permit soldiers, when necessary, to wage war. It would not consign them to the futile chores of policing streets and installing plumbing, with which they’ve been burdened by liberal internationalism. It’s not that there should be no role for constructive, rather than destructive, personnel in a military – there should. But they should be in the National Guard. French agrees:

That’s why I wonder if a libertarian military might be more lethal, even on smaller budgets. A trimmed-down bureaucracy, an increased emphasis on the destructive rather than nation-building capabilities of the force under arms, and doctrines designed to inflict maximum (non-nuclear) destruction on enemy forces rather than transforming and democratizing communities — all of this could add up to a more lethal (yet smaller) military.

After 9/11, the U.S. military experienced a spike in recruitment. Barring a staggering coincidence, I don’t imagine that many of these recruits expected to be sent to Italy or the United Kingdom, which each host 10,000 U.S. troops. Nor do I suspect they wished to go Germany or Japan, each home to contingents of 45,000 American soldiers. As the U.S. continues to plummet into debt, these latter countries are becoming economic powerhouses at our expense.

Defense analyst Adam B. Lowther has written a fascinating paper for the National Defense University titled “The Post-9/11 American Serviceman.” On the worldview of servicemen, Lowther writes “Believing that man is a fallen creature and wicked by nature, the military is suspicious of grand proposals for creating world peace.” That’s a “very strong libertarian streak” if there ever was one.

French is right to say that a libertarian military would be more formidable: libertarians would let the military do its job.

One thought on “Liberty at War”