The center of George Mason University is the Johnson Center. The Johnson Center contains the main food court, academic offices, and meeting rooms. On the first floor of the Johnson Center, there is one set of bathrooms which include Islamic footbaths. There is absolutely no denying that the Islamic footbaths are for religious purposes. They are for the expressed purpose of Muslim ritual. The university does not even attempt to hide this fact. Right there, this is a blatant violation of tax-payer money being used to promote one religion.

If the university cares about diversity and equality so much, well, then, I’m a Jewish student. Why aren’t there tax dollars dedicated to putting mezuzahs over every single door in all of the dorm complexes? Oh, right, because that would be an absolute gross violation of tax payer dollars for someone else to fund my personal, private religious activities. For some reason, Mason is capable of overlooking tax-payer money being used to finance Islam, and only Islam, while espousing the notion of equality.

The two most obvious, obnoxious, and outright in-your-face examples of the university using tax-payer dollars to prop up Islam are the Islamic footbaths and the Muslim praying area. However, the university has also been catering to Islam through the student activities.

Since George Mason University is a public university, it receives most of its funding from the state. Student activities, and student organizations, at Mason are also funded by the state. While I served as treasurer of the College Republicans, I was made aware of the rules and regulations regarding school funding (i.e. tax-payer funding) of events. Theoretically, the university will pay for most, if not all, expenses made by any group as long as the proper forms are filled out and handed to the corresponding bureaucracies.

When I first came to Mason, I quickly heard about the John Lewis event that had been canceled. I was told by individuals who arranged the event that it was canceled because of “security concerns.” It’s painfully ironic that an event about Islamic terrorism was canceled due to fears of Islamic terrorism. The event was later held in a hush-hush manner, so that the student groups involved would not be forced to pay for extra security.

A few months in to my time at Mason, I came across this flyer on campus: 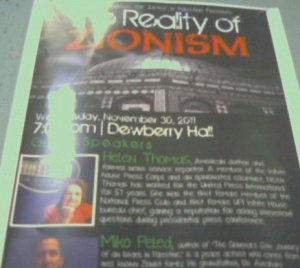 A few months later, I received an e-mail from the university notifying me of an upcoming event: 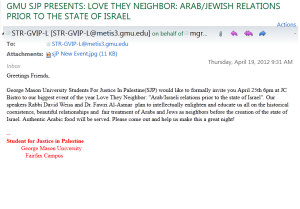 The first thing to notice is that this e-mail about “Arab-Jewish Relations Prior to the State of Israel” was sent out on April 19th, 2012. What else was April 19th, 2012?

The second piece of pertinent information is that the anti-Israel event, hosted by “Students for Justice in ‘Palestine’”, was scheduled for April 25th, 2012. What else was April 25th, 2012?

Lately, George Mason University has created a few new student groups. Not only is there “Students for Justice in ‘Palestine’”, now there is also “Students Against Israeli Apartheid”. Seems pretty redundant, huh? At the same time, George Mason University required the prospective Tea Party group and Constitutionalist Conservatives organizations to prove how they were different than the College Republicans, before the groups eventually collapsed under the bureaucratic requirements to start a recognized organization.

Even the “entirely apolitical” “Muslims Without Borders” has started participating in the “Palestine” dialogue: 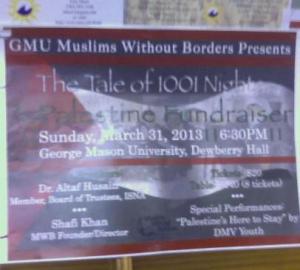 This advertisement is extremely disconcerting. It is an event in support of  “Palestine”, soliciting donations, but there is absolutely no specification about where the money from the fundraiser is going. It is extremely likely that the money being shoveled in to the “Palestinian” cause is going to fund terrorist activists. George Mason University allowed for this event to be held on campus, with its seal of approval. George Mason University also funded the event asking for money to go to “Palestine.”

At least Muslims Without Borders seems to want to further their cause (whatever that may be—caliphate, perhaps). Students Against Israeli Apartheid, however, seems to have resorted to profanity: 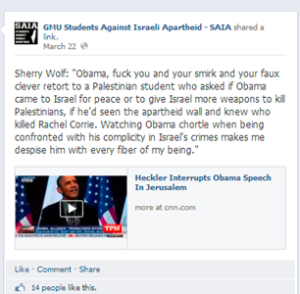 As well as literally stating they do not want a dialogue: 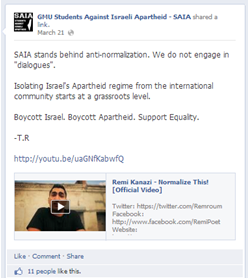 Currently, the university is covered in propaganda for “Islam Awareness Week.” Yes, my school is actually attempting to make people aware that Islam exists. George Mason University has an extremely large Muslim student body; however, I guess no one is aware that Islam exists. Funny, since this school is right near the Pentagon. I thought everyone was made aware of Islam’s existence on 9/11.

Islam Awareness Week happens to be during International Week this year. This means that “Palestine” was participating in the flag-waving: 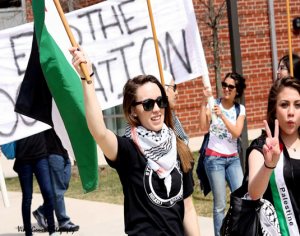 The International Week is supposed to be a welcoming environment for the gigantic international student population on campus, yet the people from Israel received boos and snide remarks. The students from Israel have absolutely nothing to do with the policies of the Israeli government. “Palestine”, on the other-hand, received thunderous applause. Alas, George Mason University prides itself on acceptance of diversity.

Since the weather has been improving these past few days, people have taken to the campus center to promote their causes.  The other day, I was standing with a friend, Chris Pavlovych, when we were approached by a woman handing out these flyers: 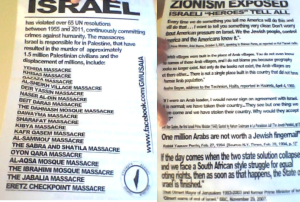 These flyers are from an approved student organization, funded with tax-payer dollars, at George Mason University. Upon looking at me, the woman with the flyers immediately ripped the flyer out of my hands and gave it to my friend. A few moments later, another person approached Chris to give him yet another copy of the same flyer. When he offered a rebuttal in defense of Israel, the response was, “Oh, you’re one of those people.”

Perhaps the most important symbol to prove just how strongly George Mason University promotes Islam is Zachary Chesser. Before coming to Mason, Zachary was described by his peers as being a normal kid. At Mason, he became radicalized. He’s best known for being the individual who threatened the creators of “South Park” for using an image of Muhammad.

George Mason would be rolling over in his grave if he knew the university which bears his name was using tax dollars to support Islam. In fact, the issue of tax dollar funding is not localized to Virginia. Since Mason accepts federal support, federal money, and federal student loans, every single tax paying American is currently funding the activities at George Mason University. The left loves to cry “separation of church and state”, but there is never an issue of “mosque and state.” Anyone who opposes the use of their own money being funneled into pro-Islam activities is an “Islamophobe.”

Edit, 7:05 PM: Since publishing this post, I have remembered that my school has a Muslim basketball team. Flyers were distributed, and I took a photograph of one of them. I am currently trying to locate the photo. There are also dining services on campus that are Halal.