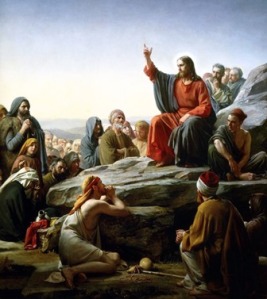 The Bible can teach us much about life, but most notably, it can teach us how to conduct ourselves as leaders of a young movement that needs guidance. Many of the historical figures detailed in the Bible, especially at the birth of a new and world-changing religion, Christianity, were themselves leaders of a young movement; leaders who were able to overcome obstacles  and led to the establishment of what has arguably been the most influential religion in history.

“[The] Son of Man did not come to be served, but to serve, and to give His life a ransom for many.”
-Matthew 28:20, New American Bible

While this is clearly an allusion to Christ’s death on the cross, it tells one of the greatest lessons of leadership.  As leaders in the movement, we should not seek for others to do things for us, but to do things for others.  As leaders, we should be willing to go out of our way, assist others with their activism goals, and apply our talents where others can use them in order to serve the movement.  Leaders, like Jesus, always seek to put other people ahead of themselves and deny material comforts, or comfortable complacency, for the greater good.  Not only does this aspect of leadership have an impact on the movement as a whole, but, if you abide by such a lesson, you will also be respected and relied on by many. You will also be seen as someone who is capable of many functions, which, in my experience, is one of the greatest feelings in the world.

“For which one of you, when he wants to build a tower, does not first sit down and calculate the cost to see if he has enough to complete it?”
-Luke 14:28, New American Bible

This verse speaks to one of my biggest problems with the movement as a whole; the assumption that things will come fast and be easy to accomplish. Calculating the cost of the tower refers to seeing the big picture. We must know how much work it will take to build our tower- with the tower being a metaphor for the political and academic influence in society.  As leaders, we should be able to see how much work we must put into a certain task to see fruition, whether that be an advocacy campaign for public policy or political campaigns at the local, state, or national level.  To not calculate costs may run you the risk of not completing the allegorical tower.

“Let no one look down on your youthfulness, but rather in speech, conduct, love, faith and purity, show yourself an example of those who believe.”
1 Timothy 4:12, New American Bible

The movement is full of those in their late teens and twenties. We are often told by those, whether they are older libertarians or older Republicans, that we are too young to be experienced enough to know about the world.  They often reference how many elections they’ve voted in and appeal to their age, not realizing that many of us have been involved since we were in high school.  This verse has often reminds me that, regardless of what others say, I need to remain involved.  I will not let them look down on me for my youthfulness, but will instead work more vigorously towards my goals to represent the movement in a honorable way.

The Bible is not merely a religious document, but a handbook for life and the many different aspects of life that face us on a daily basis.  It has provided inspiration for almost two thousand years, and will continue to do so as long as there are people who are open to its inspiration in their daily lives.

One thought on “The Bible and Leadership”